In 1936, as a 20-year-old, Jože Bizjak (the father) finished school, and passed his driving test in Zagreb in 1932. For four years he worked as a driver for the wholesaler Adamič from the city of Kranj. In 1936, he bought his own truck. His first machine was an American-made FORD INTERNATIONAL with a 100 HP (horsepower) petrol engine. 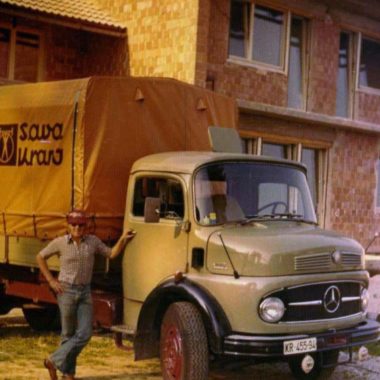 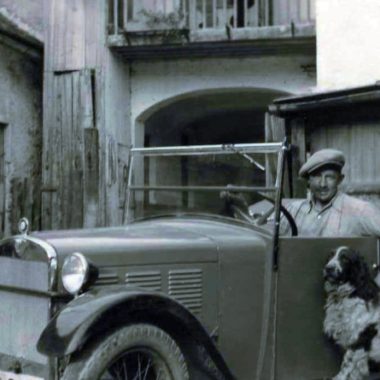 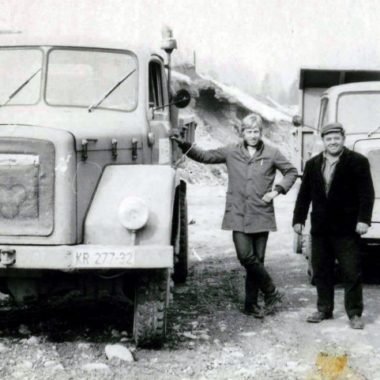 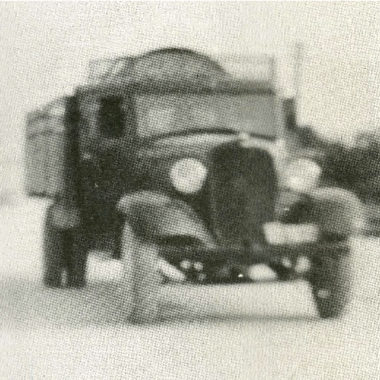 Industrial development required the building of new roads. Jože helped build the first concrete road Kranj – Ljubljana with his truck. Cement for the road was being transported from the cement works in Mojstrana while the crushed stone was brought from the Zgornja Kokra quarry.

The truck was requisitioned and taken away to Sremska Mitrovica, while Jože was mobilised into the army where he would drive a rescue vehicle.

After the war there was a shortage of everything yet the need for transportation was great just the same. So, my father and his friend Ludvik Starič (“the flying man from Kranj”) built a van from the remains of a German car by sawing through the wooden bodywork and fitting an open container at the rear end of the vehicle.

In the spring of 1950, my father bought an OPEL BLITZ truck with a 3.5-tonne capacity.

He used it for transporting mail. With this truck he drove his wife Poldka to the obstetrician Dr Andrejašič in Kranj in December of that year. Their son Aleksander – or Saša, as he is often called – was born during the drive. Father and son were together not only during the delivery, but ever since too, and so was the truck. An indication of how well the father taught his “Saši” and how good a student his son can be seen in the fact that when his father was injured, Sašo sat behind the wheel of the truck. But since he was only 7 years old, his mother came to his aid, operating the wheel while the gear lever and the accelerator pedal were Aleksander’s job. The little driver was trusted even by the police who issued a permit confirming that such a crew was transporting mail.

It was hard to be a craftsman in those times. There was no sick leave and they had to pay for medical services by themselves. Jože’s injury was very hard – he was burned when cleaning spare parts for the truck and was consequently incapable of driving for more than a year. The national regulatory framework was not supportive of craftsmen during that period either. For that reason, a fund for craftsmen was established, of which Jože Bizjak was also a member. Drivers and car mechanics also felt the need to found an association specific to their field of work. Thus, Jože Bizjak became one of the founding members of the Association of Drivers and Car Mechanics of Kranj.

When Jože retired in 1973, his son Aleksander Bizjak continued the road haulage business. The aspiring young man soon expanded their services. In Kranj the rubber industry had seen significant development. Aleksander would transport its products – mainly car tyres and V-belts – all over entire Yugoslavia. He would keep up with the developments within society and, since the period 1970–1980 was one of intensive construction works, he bought a truck, an MB 1626 dump truck with a trailer. He started transporting cement for Merkur shops in the Gorenjska region, and later for all their customers in Slovenia and Croatia. Soon the workload was too much for one truck to handle and so, in 1984, he bought a second vehicle, an MB 1638 semi-trailer truck. He hired his first driver, his nephew Igor Trilar. 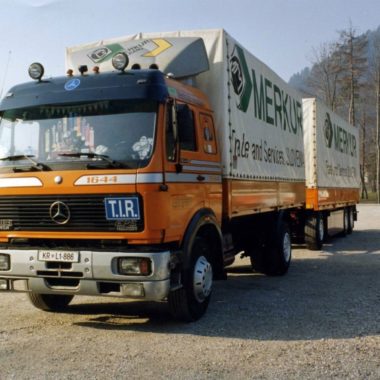 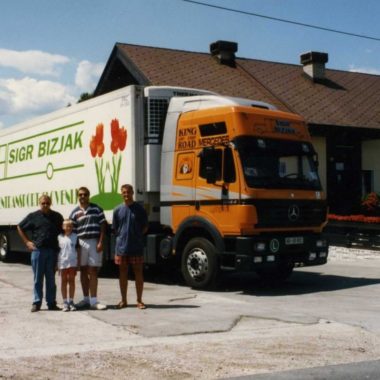 Aleksander did not only invest in trucks, he considered regular maintenance of vehicles to be of high importance as well. For all these years, he made sure he had a garage rented in Voglje, near Kranj. In 1980, he bought 3000m2 of land in Zgornje Bitnje, near Kranj. He had waited for three years to obtain the building permit, and in the spring of 1984 he started building a garage which he also brought to completion before the winter. Apart from the garage, he also had room for maintenance and washing of vehicles in Bitnje. By 1984, he already owned a high-pressure machine for washing trucks, an air- operated grease gun for lubricating trucks and trailers, and a 10-bar compressor to help him with tyre replacement.

Although he had waited for building permit documents for three years, this paid off in the following years, as the building with its associated parking lot still complies with all current legal requirements and can still be used today.

In 1980, his first son Grega was born, and in 1985, his second son Rok. Even as little boys, they were always at their father’s side in the truck, and on Saturdays they would help him wash and maintain the vehicles 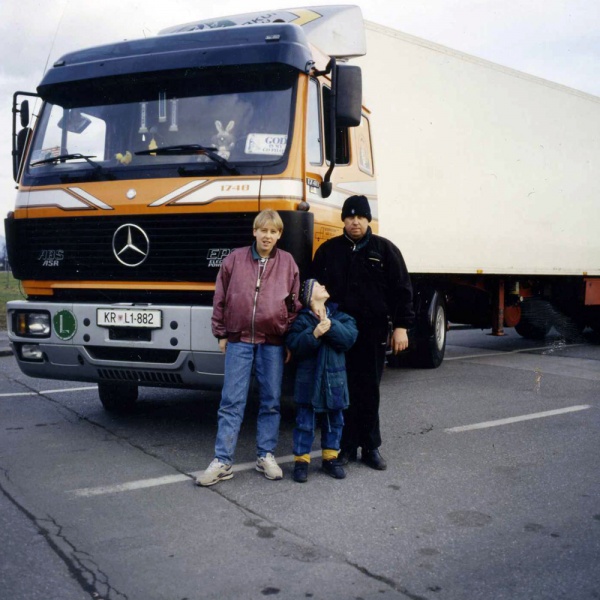 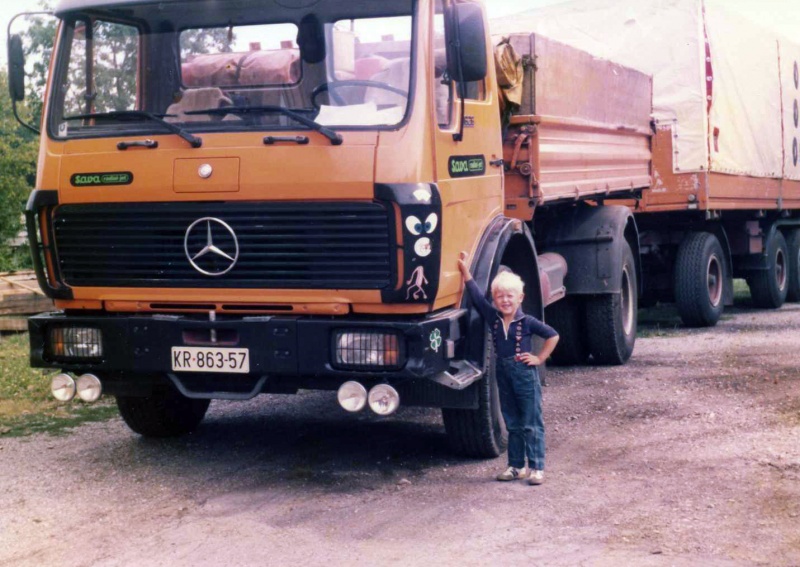 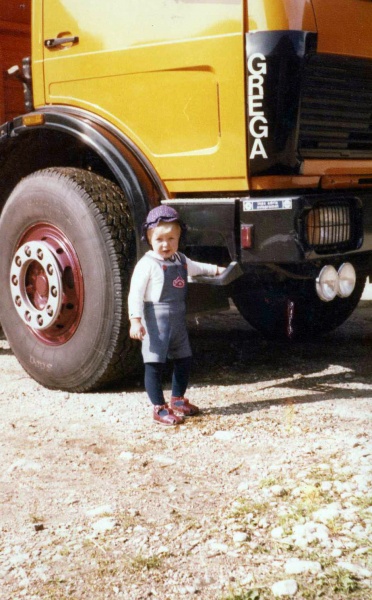 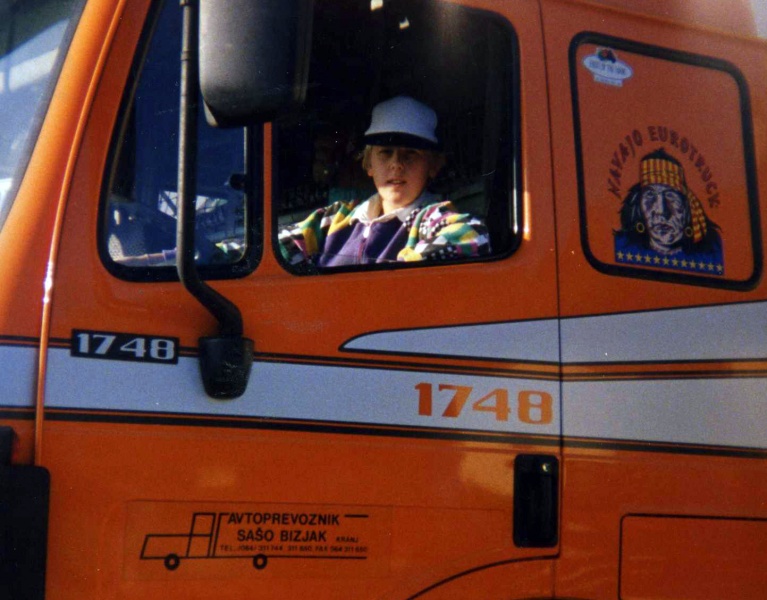 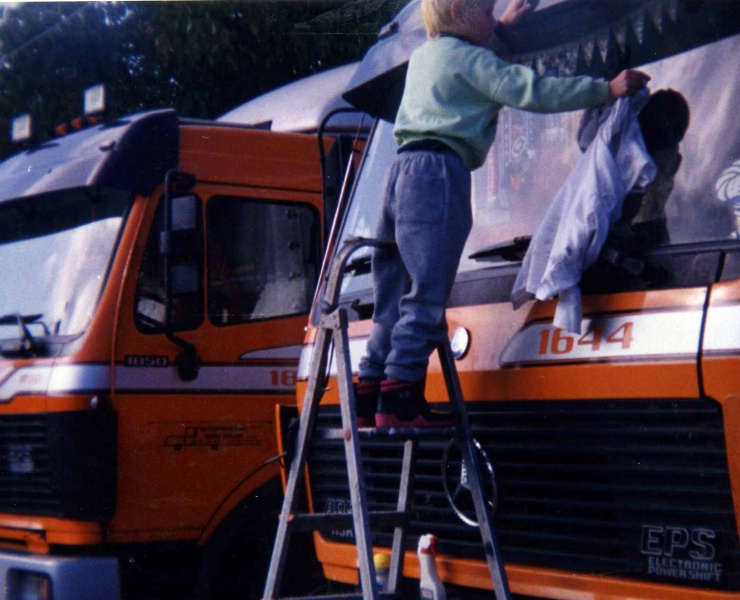 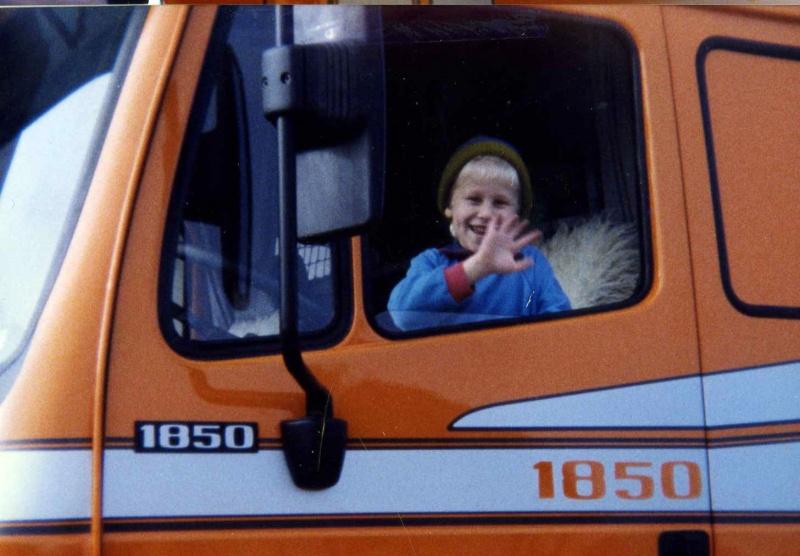 Throughout all these years as a craftsman, Aleksander was himself also actively engaged in driving trucks.

With the onset of independence of Slovenia, the need for international transport arose. He sensed that a need for new types of transport was evident in the transportation business, i.e. a transport of perishable goods. That’s why he bought the first refrigerated semi-trailer in 1992 and started transporting fruit and vegetables from Italy, and in 1994, flowers from the Netherlands…

From year to year the volume of operations, the number of vehicles, the number of employees and of new business partners was increasing. There were problems as well during this time. This was a period of trouble with permits. To be able to carry out several transports, he was purchasing the most ecologically advanced vehicles of the Euro 3, 4 and 5 standard.

Each year SIGR Bizjak Transport was becoming more and more recognised in domestic as well as international transport. They had built their visibility with quality work, which was the joint result of each and every employee’s good work. Each of them had contributed his/her share to the chain of successes and growth of SIGR Bizjak Transport.

A significant increase in the volume of work, vehicles and employees, the construction and relocation to new business premises are the main reasons for the restructuring of the company and the consequent establishment of the company under the name SIGR transport in skladiščenje d.o.o (SIGR transport and storage company), or in short, SIGR D.O.O.

The main goal of the company is the continuation of the good work, namely:

Our main service is the transport of perishable goods in international and domestic road freight transport.

The trucks and trailers are designed fully to meet the requirements for the transport of perishable goods – flowers – both as regards the vehicle dimensions and ensuring the appropriate temperature regime and the ecological standards of modern society. 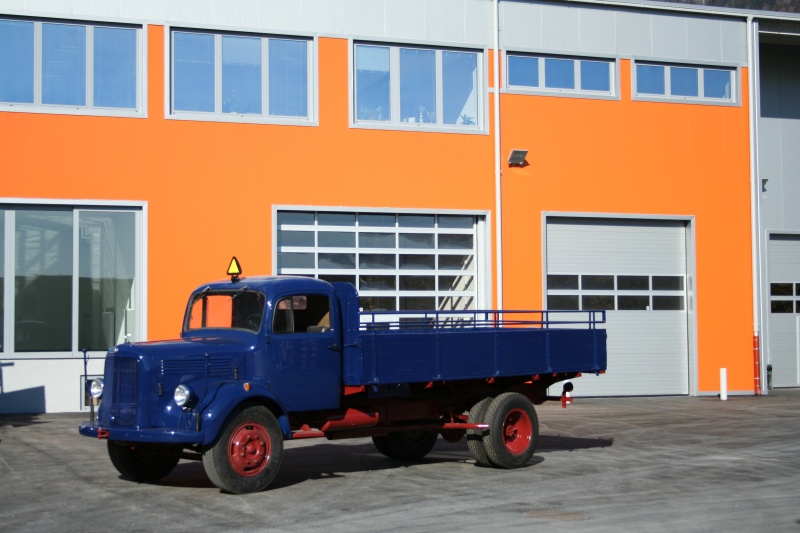 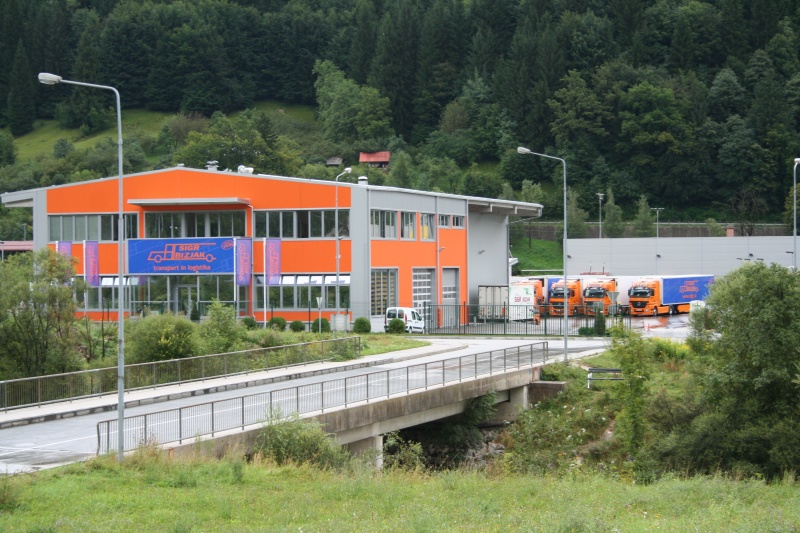 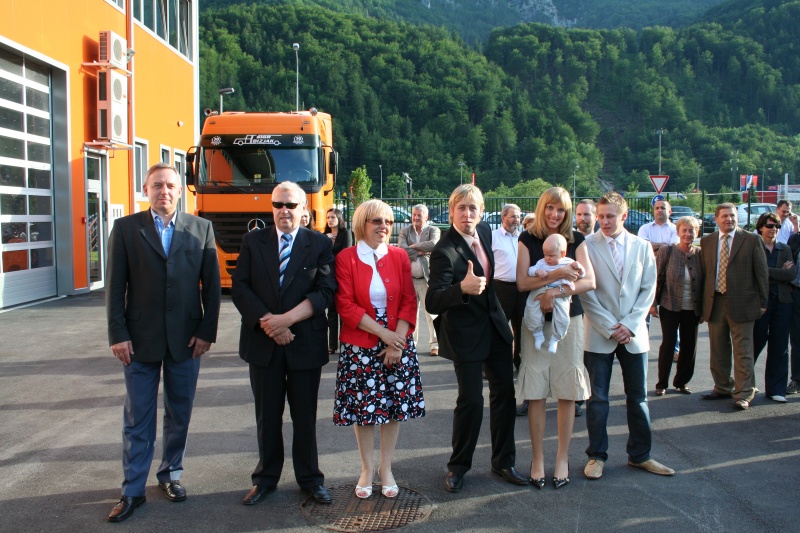